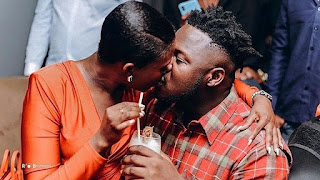 Medikal and Fella Makafui are planning to get married in secret and tell Ghanaians about it later.
Fella revealed this in a chat with Kofi Adoma on his Kofi TV YouTube channel.
At the moment it’s clear that whatever fake breakup those children planned, it’s over now and they’re back together.
According to Fella, when the time comes to get married they’re just going to have a private ceremony that almost no one will know of.
Ghanaians will only know about the marriage when they see her flaunting her ring.
Fella also made it clear that the entire ‘breakup’ with Medikal was just a plan from her management.
Watch…